The design of love

The vase takes its inspiration from the Shiva flower vase made by Ettore Sottsass in the 1970s when Europe was experiencing an important cultural revolution. At that moment, the aim was to reclaim sexual liberty, but now, having concluded that phase, we need to take the next step. It is time to take up the key values that constitute humanity in all its richness: love, kindness, compassion, ethics, respect, generosity and solidarity. 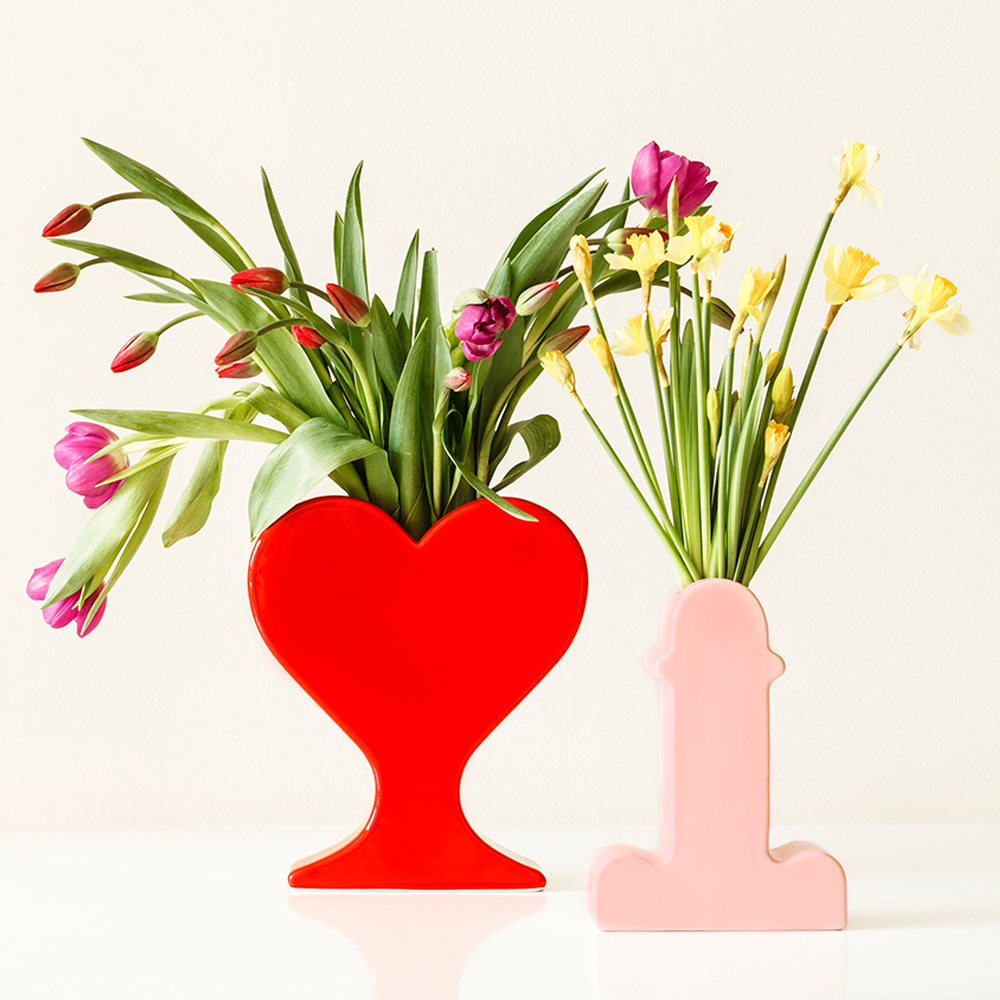 The heart is a universal symbol of love, which is why it has become an insufferably banal image. There are all sorts of heart-shaped objects out there on the market: spectacles, soaps, handcuffs, watch hands, cakes, clocks and beds… Even, and this is no joke, buildings and even exotic islands. Most degrade the significance of the heart and tend towards commercial tat. What is more, to walk past shop windows around Valentine’s Day is quite nauseating. Even though you may well end up liking the far-fetched contributions to the unjustly vilified world of kitsch. Because the heart is undoubtedly the staunchest ally of excessive, cloying, schmaltzy pastiche.

Every now and again, however, a few additions appear that are so original that they return some legitimacy to the category. The elegant Heart Cone armchair (1959) for example, by organicist Verner Panton, or magician Ingo Maurer’s heart-shaped lamp (1989) that was given the moniker ‘One from the Heart’ that truly oozed an aura of romanticism with its heart-shaped light reflected by a playfully heart-shaped mirror. Ron Arad’s Soft Heart armchair is another iconic piece of furniture. The rocking chair version throbs as if in tune with a beating pulse… In the world of fashion, it was here in Spain that Ágata Ruiz de la Prada spearheaded the unfettered the heart trend. In the world of graphics, Milton Glaser’s universal logo declaring his love for New York stands out on account of its roundness. It has become legendary and, therefore, profusely imitated.

The Cor vase (cor is Catalan for heart) by artist Pepa Reverter has now arrived and has joined the family of decorously designed hearts. t has done this on the back of the good intentions behind its design on the one hand, and its rounded beauty on the other. The source of the shape of the vase is interesting. It lies in another famous vase, the Shiva flower vase, designed by Ettore Sottsass in 1973. Back then, the iconoclastic Italian architect used to travel to Barcelona on a regular basis to visit his girlfriend Eulalia at the Eina school. He made this and other minor pieces of architecture whilst combining his intense romance with trips to India. So, contrary to what the phallic shape might suggest, it is neither an ode to phallocracy nor a celebration of machismo but, instead, an exaltation of fertility as Shiva, the Hindu god of destruction is also the god of renewal and life. he water in the vase feeds and nourishes the flowers in it, whilst its pale pink colour is a nod to the most naïve carnality from the perspective of an artist who falls in love easily and is full of life.

Made by BD Barcelona Design almost half a century ago, this small object has found increasing popularity with the public and has been the inspiration for Pepa’s Cor vase. She matches sex with love, whilst her heart vase will feed the flowers with nutritious liquid and they in turn will add a splash of colourful hope to this sick world. Blood pounding is life. Cor is a sincere, basic and universal expression of this, an impassioned three-dimensional emoticon. Made with impeccable technical precision, the vase is of a quality and intense red colour that are hard to achieve in ceramic, with the colour accentuating its sturdy simplicity.

Pepa wants to broadcast a message of hope through an object. Artists are like that: they give birth to their creations for personal reasons but sometimes, when they are in tune with the times, their output strikes a chord and becomes universal. Let’s hope this vase does: there is indeed a need to generate love, a lot of love, in these hate-filled times we live in. This delightful vase is up for the challenge.

The cart will automatically calculate shipping costs from the second unit.